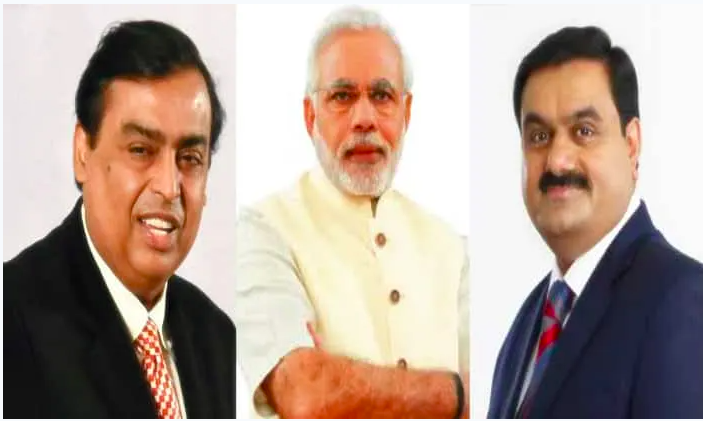 “Bhagat Singh believed that political revolution doesn't mean that we seize the rule from the British Empire and pass it over to the few Indians, the achievement of widespread economic liberty is our ultimate goal.” But in today India, there are two persons who enjoys this special monopolistic privilege.

Banks don’t approve loans of the middle class if their credit score is low. But, despite having written off thousands of crores, these two getting big loans from public sector banks. Adani is the richest person in India, but not the highest taxpayer, how? Current government has put taxes on Food, Fuel to extract money from the common man but reduced corporate tax to support their Billionaire Banao - Billionaire Bachao Yojana.

During last five financial years, scheduled commercial banks wrote off loans amounting to over Rs 9.91 lakh crore. Only in financial year 2021-22, Adani had total debt of Rs 2.21 lakh crore. A large portion of this debt is given in industries where the Adani Group has no track record of success. Yet he is taking thousands of crores of loans from public sector banks. How does SBI and other banks offer such large and dangerous loans to the Adani? What if Adani defaults his debt repayment?

Not only financial institutions, but central agencies also gave open exemption to Adani. So far, many tonnes have been recovered from Mundra post controlled by Adani Group. Gujarat has become an entry point for drugs into India but all central agencies like CBI, ED, and NIA are mute on these drug deals. No news media discussing this in prime time. All major media houses are under control of BJP led government. NDTV was the only news outlet that criticizes BJP and its policies but it is also acquired by Adani.