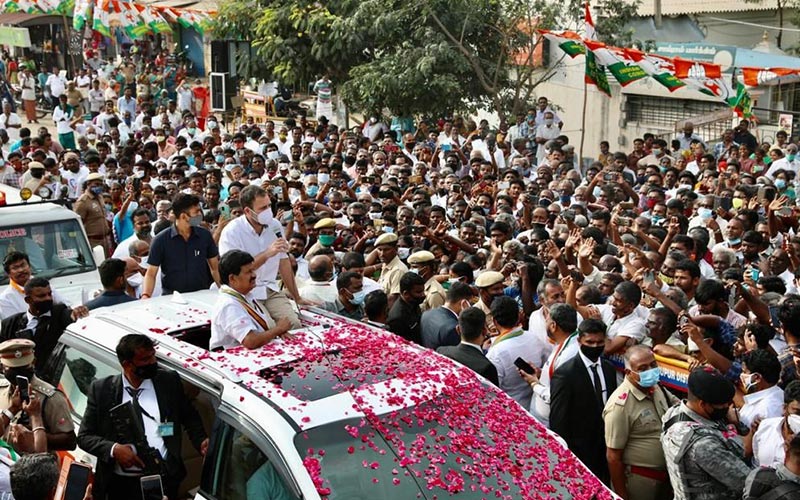 Shri Rahul Gandhi interacts with the people of Tamil Nadu

Shri Rahul Gandhi kicked off the Indian National Congress party's campaign for the upcoming Assembly elections in Tamil Nadu. He interacted with the people of Tamil Nadu for three days and visited various districts and events to truly understand the voice and the problems of the Tamilian people.

The Congress leader and sitting Lok Sabha MP from Kerala's Wayanad, participated in roadshows at Coimbatore, Tiruppur, Poondurai, Perundurai and Uthukuli in Erode district, Dharapuram, Chinnadharapuram and Karur. He also interacted with representatives of the MSME sector in Tamil Nadu, with industrial labourers, the weaver community and the farmers of the state. Shri Rahul Gandhi listened to their plight and emphasised the importance of celebrating Tamil culture. Further, he paid floral tributes to India's freedom fighters, Tiruppur Kumaran and Dheeran Chinnamalai.

Shri Rahul Gandhi interacted with representatives of Micro, Small and Medium Enterprises (MSME) in Kalapatti, Coimbatore where he heard the problems of the sector and how the BJP government has done nothing to help them. He stressed that the major economic policies of the current government like Goods and Services Tax (GST) and demonetisation broke the backbone of the economy and destroyed the MSME sector.

A massive crippling blow delivered to the economy was demonetisation. It devastated small and medium industries because you are dependent on the cash flow,' said Rahul Gandhi. Criticising the GST decision of the Modi government, he added, 'It needs to be restructured, it needs to be conceptualised. The current regime imposes a huge load on smaller regional businesses. It is the commitment of the UPA (United Progressive Alliance) government that when we come to power, we will restructure the GST.

Listening to the plight of Tamil Nadu's industrial labourers and understanding their problems, Shri Rahul Gandhi said, We have an unemployment problem. The first thing we need to do is start the economic engine once again which is currently jammed. Also a linkage between our education system and business system is critical. The former Congress President said that he has a special relationship with the state and is indebted to the people of Tamil Nadu for having a loving relationship with his grandmother and father, former Prime Ministers, Smt. Indira Gandhi & Shri Rajiv Gandhi.